Mindfulness Ireland is a network of people in Ireland who aspire to practice mindful living and mindfulness meditation according to the teachings of Thich Nhat Hanh, affectionately known as “Thây”, or “teacher” in Vietnamese.

For more than 20 years members of Mindfulness Ireland have been meeting to practice sitting meditation, walking meditation and sharing a cup of tea together. Groups of practitioners who meet in this way are found all over Ireland, and are known as “Sanghas”. Sanghas also offer introductions to the practice, days of mindfulness and retreats to support individuals and families. Mindfulness Ireland Sanghas are often said to practice in the “Plum Village style”, named after Thich Nhat Hanh’s large monastic community in the south of France. Mindfulness Ireland CLG is a company limited by guarantee in Ireland since 2011 (registered company number 501142) and is run solely by a group of volunteers.

Mindfulness Ireland organises retreats with monks and nuns from the Plum Village tradition twice a year. Usually over the May and October Bank Holiday weekends (Republic of Ireland Holidays). 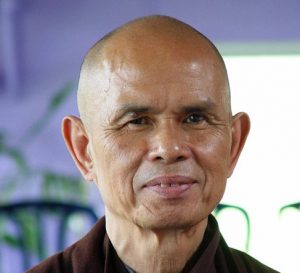 One of the best known and most respected Zen masters in the world today, poet, and peace and human rights activist, Thich Nhat Hanh (called Thây by his students) has led an extraordinary life.

Born in central Vietnam in 1926 he joined the monkhood at the age of sixteen. The Vietnam War confronted the monasteries with the question of whether to adhere to the contemplative life and remain meditating in the monasteries, or to help the villagers suffering under bombings and other devastation of the war. Nhat Hanh was one of those who chose to do both, helping to found the “engaged Buddhism” movement. His life has since been dedicated to the work of inner transformation for the benefit of individuals and society.

In Saigon in the early 60s, Thich Nhat Hanh founded the School of Youth for Social Service, a grass-roots relief organization that rebuilt bombed villages, set up schools and medical centers, resettled homeless families, and organized agricultural cooperatives. Rallying some 10,000 student volunteers, the SYSS based its work on the Buddhist principles of non-violence and compassionate action. Despite government denunciation of his activity, Nhat Hanh also founded a Buddhist University, a publishing house, and an influential peace activist magazine in Vietnam.

After visiting the U.S. and Europe in 1966 on a peace mission, he was banned from returning to Vietnam in 1966. On subsequent travels to the U.S., he made the case for peace to federal and Pentagon officials including Robert McNamara. He may have changed the course of U.S. history when he persuaded Martin Luther King, Jr. to oppose the Vietnam War publicly, and so helped to galvanize the peace movement. The following year, King nominated him for the Nobel Peace Prize. Subsequently, Nhat Hanh led the Buddhist delegation to the Paris Peace Talks.

In 1982 he founded Plum Village, a Buddhist community in exile in France, where he continues his work to alleviate suffering of refugees, boat people, political prisoners, and hungry families in Vietnam and throughout the Third World. He has also received recognition for his work with Vietnam veterans, meditation retreats, and his prolific writings on meditation, mindfulness, and peace.

He has published some 85 titles of accessible poems, prose, and prayers, with more than 40 in English, including the best selling Call Me by My True Names, Peace Is Every Step, Being Peace, Touching Peace, Living Buddha Living Christ, Teachings on Love, The Path of Emancipation, and Anger.

In September 2001, just a few days after the suicide terrorist attacks on the World Trade Center, he addressed the issues of non-violence and forgiveness in a memorable speech at Riverside Church in New York City. In September of 2003 he addressed members of the US Congress, leading them through a two-day retreat. Again in 2011 he has led a retreat for Congress in Washington as part of his North American teaching tour.

Thich Nhat Hanh continues to live in Plum Village in the meditation community he founded, where he teaches, writes, and gardens; and he leads retreats worldwide on “the art of mindful living.”

Thây has a simple, clear and poetic style of writing and teaching that is easy to access and understand. His teachings have brought the healing power of mindfulness to many thousands of people worldwide.

“The practice of mindfulness can help us bring peace, joy, and release both to ourselves and to our family and friends as well. Those who practice mindful living will inevitably transform themselves and their way of life. They will live a more simple life and will have more time to enjoy themselves, their friends, and their natural environment. They will have more time to offer joy to others and to alleviate their suffering.”

from Transformation and Healing by Thich Nhat Hanh

“You are already what you want to become. You don’t need to be another person or to run anymore. You are the manifestation of the cosmos. Thanks to the practice – there is no longer any complex, any longing, any desire; there is complete satisfaction, complete fulfilment. What you want to achieve is already there.”

How do I pronounce Thich Nhat Hanh?

Vietnamese is a tonal language, this is only a close approximation for how you would pronounce it in Vietnamese. (His name is sometimes misspelled as Thich Nhat Hahn, Thich Nhat Han, and Thich Nat Han.) Try to be mindful when you write it.

NEXT EVENT
there are no events currently scheduled, please check back soon